Last night I took advantage of my one night of this week and went to Jo-Ann Fabrics. I receive the circular of coupons and I had something in mind to use the 50%-off-on-one-item one. An electric ball winder. I was lucky and the ball winder was included in the sale.

I took her home, set her up, and christened her Mabel. That was when the fun began. 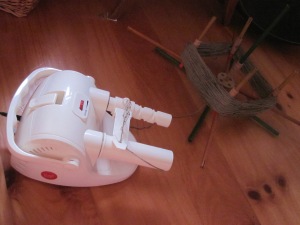 I set up Mabel and the swift on the floor of my knitting alcove; my perpetual disorganization keeps me from having much desk space. The first thing I decided to wind up was my mint yarn. I plan to use it for my next square on the Blanket. As Mabel did her thing a fair amount of difficulties arose. First, my skein was somewhat reluctant to unwind. Second the swift didn’t want to cooperate, it kept sliding around and not spinning. I might have to buy one rather than use the tinker toy one I built.

After a fair amount of cursing and mumbling under my breath Mabel produced a cake of yarn.

Glorious, is it not?

This morning I decided to try again. This time with a ball of yarn I had previously wound. Also for the Blanket.

This time it went much smoother. Must have been the swift.

Before I picked up Mabel I stepped into T.J. Maxx. There I found a wonderful box.

It’s made of rolled up magazine pages. It was so quirky felt that I should buy it. I don’t usually impulse buy, but if something is out there enough I do. Occasionally. Yarn doesn’t count. I decided it would be a better home for the Blanket yarn than my basket by my comfy chair. A box with a lid Persephone cannot get into. 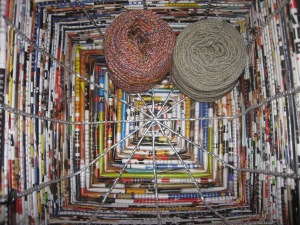 And, just because I haven’t done this in a while:

Made By Davin aka Starburn (on Ravelry)